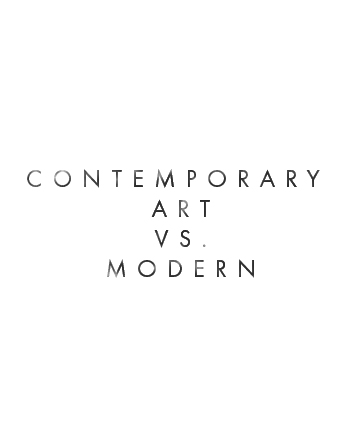 Modern art…, contemporary art…, for majority of people, the two words are used almost mutually in conversations about current events or fashion. However, in the art world, there is, indeed, a difference between the two…

First of all, the two terms are not interchangeable. There is a difference, and it is based on rough date ranges established by art historians, art critics, curators and the like. They recognized a distinct shift that took place, marking the end of Modernism and the beginning of the contemporary age. Modern art is that which was created sometime between the 1860s (some say the 1880s) and the late 1960s (some say only through the 1950s). Art made thereafter (e.g., conceptual, minimalist, postmodern, feminist) is considered contemporary.

Beyond the time frames, there are conceptual and aesthetic differences between the two phases.
A key distinction between modern and contemporary art was a shift in focus away from aesthetic beauty to the underlying concept of the work (conceptual art and performance art are good examples). The end result of a work of contemporary art became less important than the process by which the artist arrived there. A process that now sometimes required participation on the part of the audience. 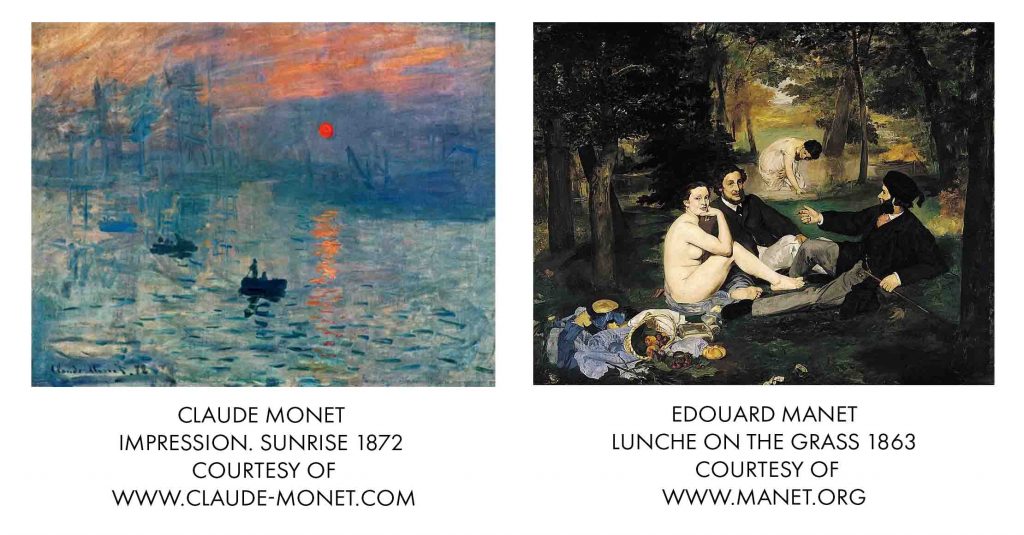 This art was called “modern” because it was not based on what came before it, nor on the techniques taught by the academies of fine arts.

Many art historians consider Édouard Manet to be the first representative of modern art. His ” The Luncheon on the Grass” caused a great scandal in 1863. He found himself on so called “exhibition of rejects”. Hence he has not, as many other paintings being accepted into the official exhibition and did not gain public recognition, which in fact hurt him. He broke in his painting with tradition, because he did not try to imitate the real world. The painting was more important to him than what he represented. Composition and restoration of the role of color became the most important for him. In those days it was a very courageous move, shocking audience and critics. It inspired his peers (his uncompromisingness, in some way, opened the way for the impressionists), and a few generations of artists, each of whom, in abstract or figurative works, experimented with new media.

Art after the Second World War has entered a new path, but its roots lie in modernism. Masters of the art of the new century were already well known. Their art, once rebellious and incomprehensible, ceased to be unusual and new.

Art was accepted, which was once surprising and fought with tradition. At the same time, in the figurative art, the methods and innovations of some modernist avant-garde masters like Picasso and Matisse have competed with the new artistic language of Dubuffet and de Koonig. Also abstain style is revived, continuing the great tradition of the pre-war period and action painting. From Dadaism and surrealism, the pop-art artists have taken a whole lot of their efforts. In opposition to him, in turn, was the conceptual art, for which the most important idea was the artwork, not its form or creative process.

In contemporary art there has always been a great tendency to experiment and seek for a novel language that corresponds to changing reality. Examples include photomontage, collage, object, environment, installation, happening, video installation, performance later.
All standards and restrictions have been abolished. Everything started to be and still is possible today in painting and sculpture. In fact, the 70s of last century seem to be the last bastion of easily identifiable artistic movements.

In contemporary art there is no one goal or point of view. It is heterogeneous and ambiguous in its pronunciation, as is the contemporary world. Nowadays one can get the impression that practically no aesthetic or moral limitations in artistic expression cease to exist.

From the author: if you like what you are reading, please feel free to follow my art on www.instagram.com/anialuk.art 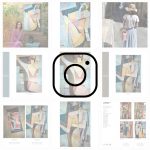 “When Piet Mondrian wanted to escape cubism he also turned to geometry but he made it his central goal. He contrasted his colors in grids, thus creating an extreme elsewhere from which he never left. He claimed that his painting hovered “in the plane” that everything was composed “by relation and reciprocity” that the color existed “only by the other color, the dimension by the other dimension” and that there had “position only as opposed to another position”. It was a cerebral who had completed his creative journey on the edge of abstraction. To the point that Dali cruelly dubbed him “Niet Mondrian”.

It is certainly not the same with Ania Luk, whose age gives her room to change her world.” Les Soirées de Paris, September 2018