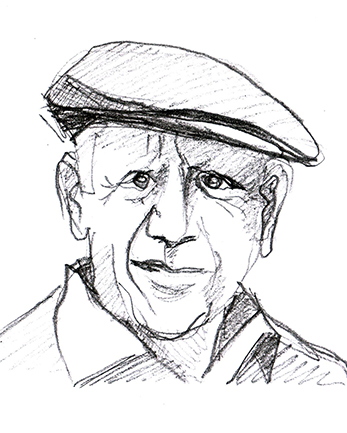 A look at Pablo Picasso, co-founder of Cubism, recognized as  one of the most influential artists of the 20th century through the prism of his women. He is perceived as the world’s most creative painter. His career spanned over a 78 year period, in which he created: 13,5 thousand of paintings, 100 thousand of prints and engravings, and 34 thousand illustrations which were used in books. He also produced 300 sculptures and ceramic pieces during this expansive career. It is also estimated that over 350 pieces which he created during his career, have been stolen; this is a figure that is far higher than any other artist throughout history. Equally prolific was his private life …

“One must act in painting as in life, directly.” Pablo Picasso

An artist and model who posed for over sixty portraits by Picasso among others “Les Demoiselles d’Avignon”. Olivier and Pablo met at Paris in 1904 and started passionate and tempestuous relationship. Unfortunately when he became a famous he left Olivier as she reminded him of more difficult times. 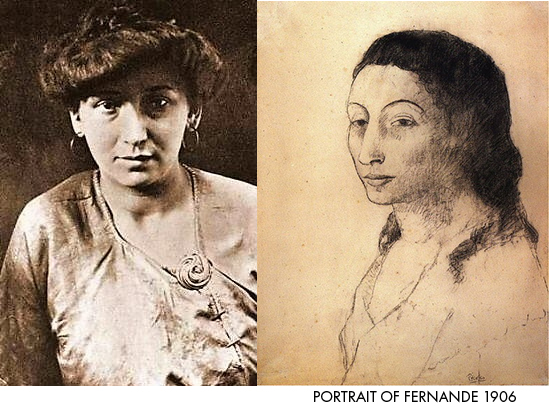 Gouel and Picasso’s relationship had a scandalous beginning, as they met in 1911 while both involved with other relationships, and began their affair before they left their respective partners… During this time Pablo left secret love notes in his paintings for Gouel, who was the model for many of his works, notably the cubist work “Ma Jolie”. Sadly their love affair was short lived as Gouel died. 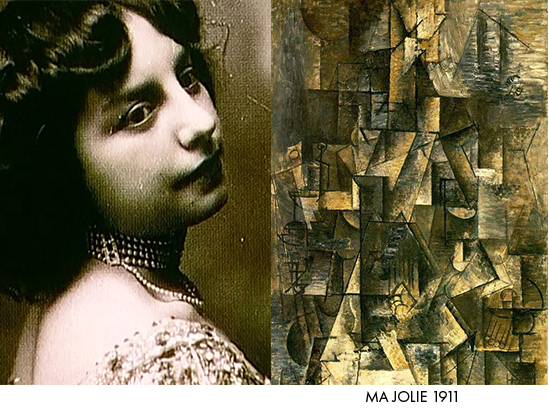 Was a Russian ballet dancer, but better known as the first wife of Pablo Picasso and the mother of his son, Paulo. Khokhlova and Picasso met when he designed the costumes and sets for the ballet production of Parade (1917). She was 26 years-old and he 36. Picasso married Olga in 1918, but the relationship waned in the late 1920s. In “Woman in White”, he depicts her at one of the heights of his love for her. 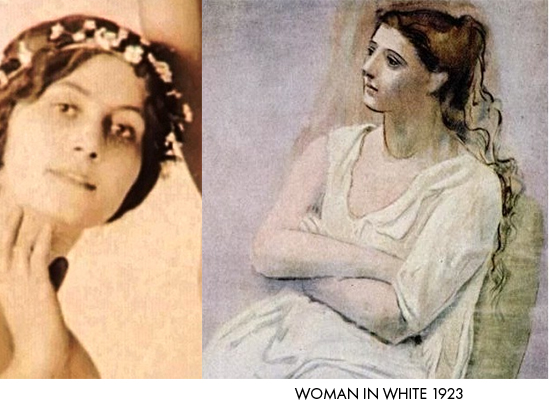 Picasso’s affair with Marie-Thérèse began in 1927 and lasted for nearly a decade, making it one of his longest relationships. However, his wife Olga did not discover the affair until much later when a friend told her that Picasso was expecting a child (Maja) with his long-time lover. In “The Dreamer” Picasso is caught up in the throws of his passion for Walter, using warm colors to depict her sensuous body in repose.

Pablo met the Surrealist photographer in 1936, at the Parisian cafe , and their relationship lasted until some time after he met a young painter, Françoise Gilot, in 1943. In the painting of Maar, Picasso depicts her on a throne, the Queen equal to the artist’s King. 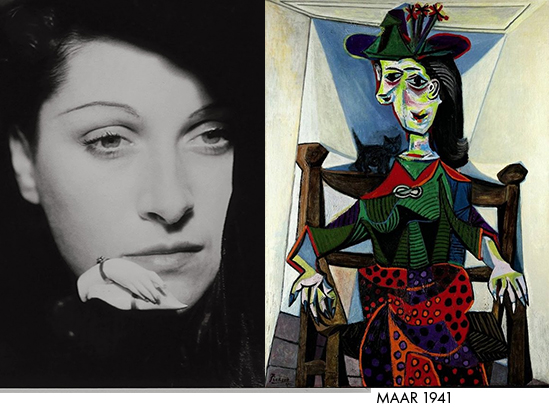 They met in 1943 in one of the Parisian restaurants, and had two children Claude and Paloma. Francoise Gilot was then a twenty-two-year-old art student, Picasso – a sixty-year-old painter. From Picasso’s portraits of Francoise, a picture of a pretty girl emanating from her youth and naturalness emerges. As in previous relationships, none of the artists’ females so far could withstand his fascination with the other sexes, and Picasso at Francoise did not intend to give up the life of his life. 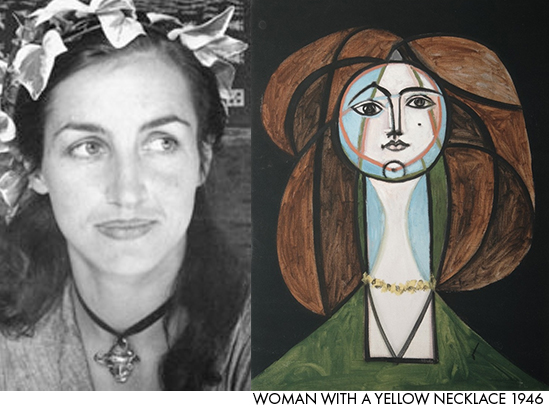 Only nineteen years old when she met the decades older Picasso, Following in the footsteps of Picasso’s previous companions, David served as both muse and model to the artist. She inspired what is known as the “Sylvette Series” of over sixty paintings and portraits. Interestingly, David’s relationship with Picasso was never consummated as she was too shy to even pose in the nude for him. This lack of carnal passion spelled the end of their time together, especially after Picasso met Jacqueline Roque. 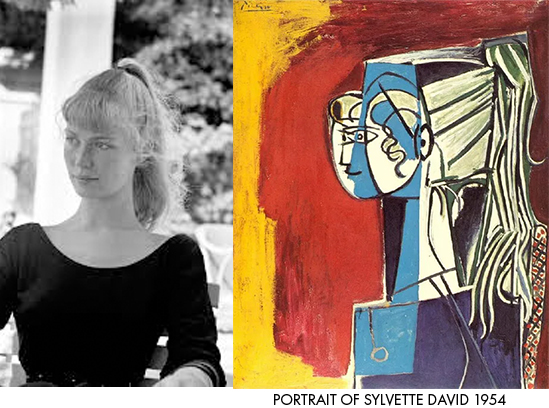 Pablo met Jacqueline on the French Riviera in 1952 where she worked at a ceramics studio. Roque was 28 years old and was 44 years younger than Picasso.  After Picasso’s first wife, Olga Khokhlova died in 1961, he and Roque married, remaining together until his death. He created over 400 portraits of her, the most of any of his loves. Roque is called the “muse” of Picasso’s old age. 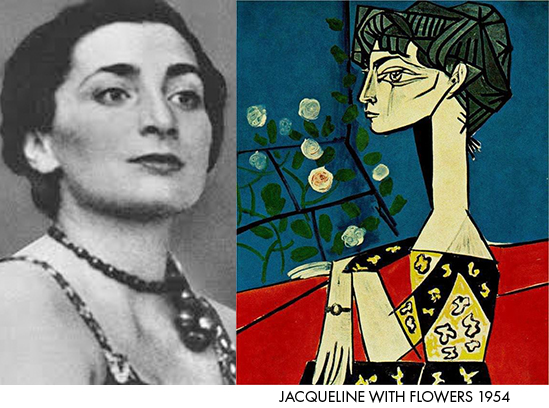 “The goal I proposed myself in making cubism? To paint and nothing more… with a method linked only to my thought… Neither the good nor the true; neither the useful nor the useless.” Pablo Picasso 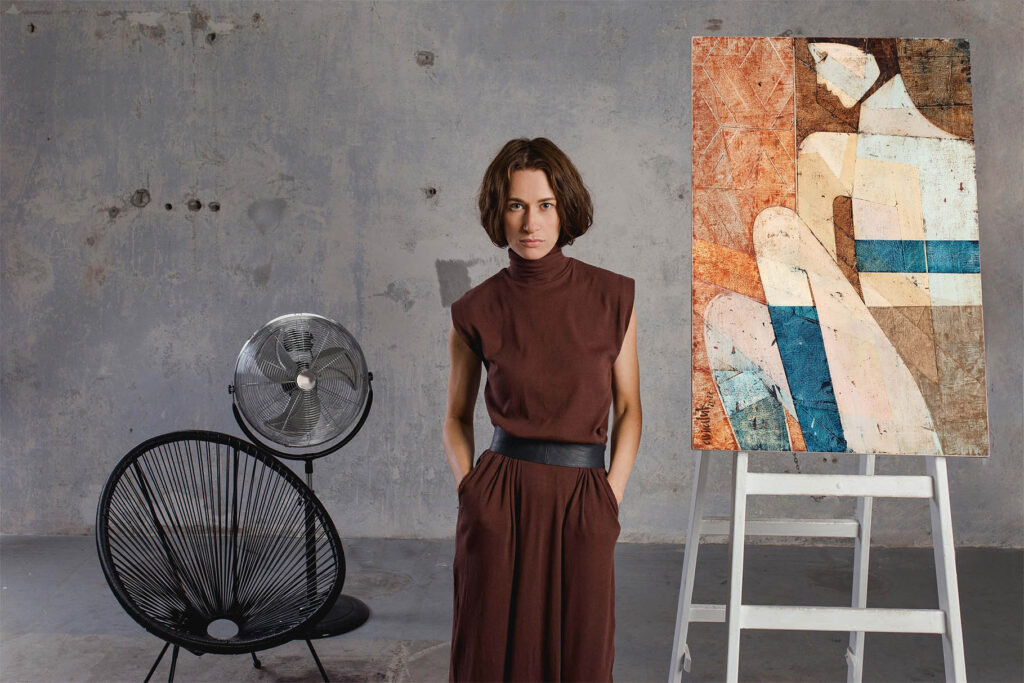