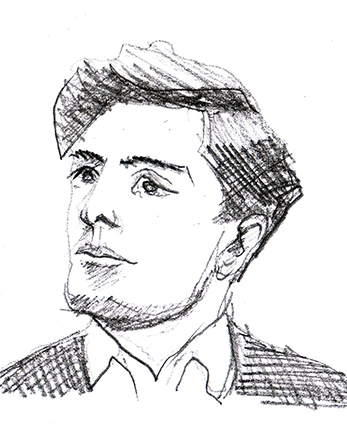 Modigliani is a unique artist, one of a kind, with a style that is recognizable at the first glance. Considered one of the most interesting painters of the twentieth century. His works nowadays cost fortune. In 2015 in Christie’s New York, his “Reclining Nude” was sold for over 170 million USD to Liu Yiqian a Chinese art collector and billionaire.

What is even more interesting, currently there are at least 1,000 fake works of Modigliani on the market, and the first fakesifications were created already in the early 20’s of the twentieth century, and thus immediately after the artist’s death. Most of them were created in the eighties of the last century. The closure of the Italian exhibition of Modigliani’s works at the Doge’s Palace in Genoa, in July last year, which was identified as a set of counterfeits was famous. Only a few of the paintings turned out to be original, and experts have been vainly fighting against Modigliani’s false works for years.

It is assumed that there are at least 350 original Italian paintings, but in fact the exact amount of Modigliani’s works is very difficult to estimate, not only because of numerous falsifications, but also because the artist often gave away his sketches in exchange for meals or drinks in Parisian bars …

Undervaluation during his life

During the lifetime his works were not appreciated by the public, nor were they recognized in the eyes of critics. Modigliani’s artworks did not sell well. The life of Amedeo and later his fiancée and muse Jeanne was far from idyllic. They were struggling with constant financial problems. The first to know his talent was Dr. Paul Alexandre. He persuaded Modigliani to exhibit his works at the Independent Salon in 1907, where they did not arouse much interest. He also managed to arrange for Modigliani access to wealthy circles, thanks to which he was commissioned to portrait the Baroness Marguerite de Hasse de Villers, known as ‘L’Amazone ’. which, moreover, was not accepted by her and was bought by Paul Alexandre. Modigliani’s work during this period oscillated between expressionism, fauvism and imitation of Toulous-Loutrec’s, to gain self-confidence over time.

The meeting with the Romanian sculptor Constantin Brancusim resulted in a period of sculpture in the creation of Modigliani, which for some time dominated his work. Modigliani was (alongside Picasso and Matisse) one of three artists of his generation who managed to achieve an outstanding level in three disciplines of visual arts: painting, drawing and sculpture. Unfortunately, his documented sculptural heritage is only 27 works.
Characteristic of Modigliani’s sculptures was the extension of proportions, almond eyes and small lips. According to Kenneth Waynes, a specialist in Modigliani, his works combine the raw strength of Michelangelo’s stone sculptures with memorable mysterious expressions of African totemic masks inspired by the artist
In 1913, he suddenly ended his sculptural activity. Perhaps the physical effort necessary to process the stone was beyond the strength of the artist’s tuberculosis, perhaps it was also influenced by finances, in any case, Modigliani in the last five years of his life devoted to painting, transferring the style initiated into sculptures.

Perhaps that’s why he is starting to do mainly portraits on commission again. He meets Max Jacob in 1914 with Paul Guillaume, a collector and art dealer who is interested in his artistic activity. At the time, he was already abusing alcohol and opium, which certainly did not serve his poor health. In the same period, Amedeo met a Polish poet Leopold Zborowski, who became his faithful friend, guardian and from that moment – the sole merchant.

In April 1917, Modigliani’s life breakthrough comes when he meets a nineteen-year-old student Academie Colarossi (one of the first art schools that were opened to women) – Jeanne Hebuterne. She was a talented, promising young painter, with her own style, in which you can see the inspirations of nabist and art deco. In her later works, of course, you can see Modigliani’s influence, but she never tried to imitate him. In fact, this promising artist, for her love for Modigliani, devoted her artistic development and career – she never arranged her own exhibition, she did not have a merchant who would sell her paintings.
She related to him against her family and common sense. It was a great love and fascination on both sides – Joanna was Modigliani’s muse – she was immortalized on at least twenty paintings. 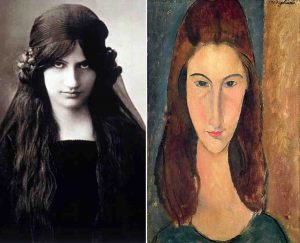 „To work I need a living being, I have to look at it. Abstraction exhausts and kills, leads to impasse.”

When you look at the images of Jeanne created by Modigliani, it is hard to believe that her life with the artist was so turbulent – you can see a lot of warmth and love in them. Modigliani loved Jeanne and their daughter in their own way, but it did not change the fact that he did not care for anybody, because he could not stop drinking. Jeanne was often forced to walk in the bars looking for her beloved. At some point, the artist was left by everyone except of one true friend – Jeanne. Most probably, she suffered from depression, which is evident in her works, on one of them in 1920 she presented her own suicide. 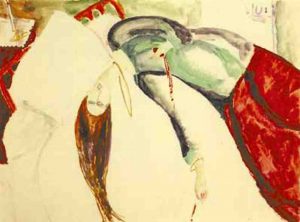 Modigliani’s portraits, exuding inner peace and full of charm, contrast so much with the lifestyle he led. His works are characterized by a delicate dark line, which outlines the silhouette contours and elongated shapes against the background of calm colored surfaces. Heads set on bent long necks, eyes without pupils and tiny lips, resembled Modigliani’s stone-carved heads. His portraits undeniably present the versatility of Modigliani as an artist – drawer, painter and sculptor.

From 1914, Amedeo’s health, strained with tuberculosis, as well as alcoholism and drug use, continued to deteriorate. Modigliani died on January 24, 1920, at the age of just 36, for tuberculous meningitis, orphaning a fourteen-month-old daughter. Jeanne, who was then in the last month of pregnancy, joined him two days later, stepping backwards through the window on the fourth floor…