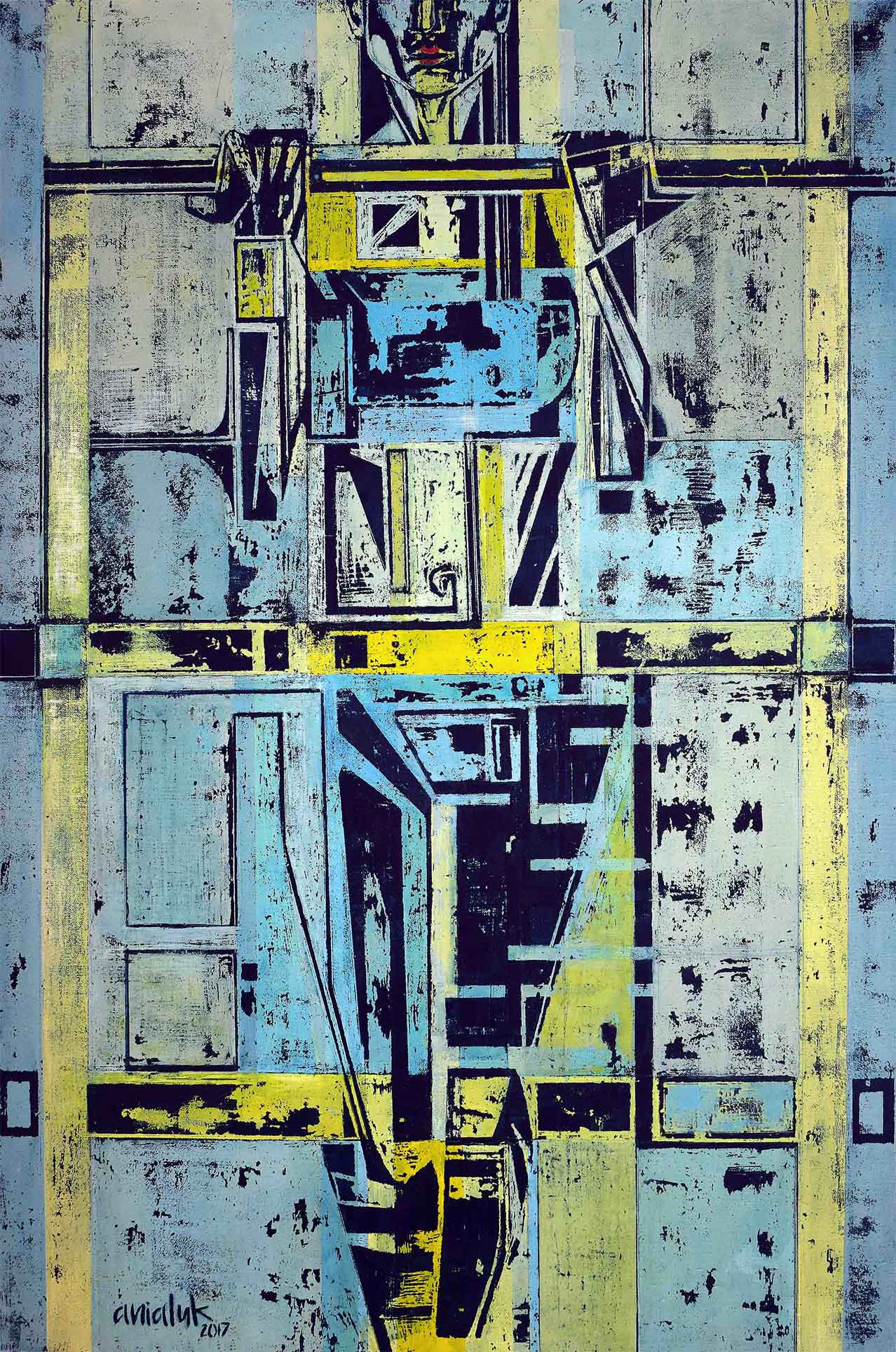 Supergirl 5, is a new visionary painting painted on canvas with own technique using acrylic paints. Absolutely emotional, energizing and unique creation inspired by cubist painting that is a combination of abstraction and realism. It  presents a sporty girl with long black hair during pull-up on the stick. She heavily trains like Tomb Raider known from  a series of computer games, comics, novels and films about fictional adventures, British archaeologist Lara Croft. Surprising composition and the way of presenting a woman’s figure and the environment in which she finds herself, like from Star Wars.

A precisely chosen color scheme and tone play so that you get an image that is cheerful in reception while maintaining a tasteful form. An expressive, mysterious but positively tuning message. As Pablo Picasso once said:

” the artist is a receptacle for emotions that come from all over the place: from the sky, from the earth, from a passing shape, from a spider’s web.”

This high quality acrylic painting is painted on canvas with a lightly textured texture, without having to be framed ornamented because the edges are linen, not covered in any color.

Painted by a painter graduated at the Academy of Fine Arts – Ania Luk. Signed on the front and back, with a certificate of authenticity, protected by a semi-matte varnish. Painting Supergirl 5 is perfect for bright and gray rooms. Leading colors – blue, green, yellow, navy blue.

The fifth painting from the “Supergirl” series.

The painting took part in an exhibitions of contemporary art, organized by the US Daylighted Gallery: San Francisco – The Refiners (‘Discovery Portrait’ – International roster of emerging and mid-career artists working in traditional and hybrid media, including oil painting, drawing, printmaking, sculpture, and photography), Paris – WeWork Lafayette and Station F.

In this series, I’ve been touching topics such as perfectionism and self-centeredness of a ‘Selfie-Generation’, which sometimes lead to narcism. Although these “supergirls” seem to live according to their own rules and to be very strong and decisive, they aren’t necessarily fulfilled.

“What greatly attracted me – and it was the main line of advance of Cubism – was how to give material expression to this new space of which I had an inkling. So I began to paint chiefly still lifes. Because in nature there is a tactile, I would almost say a manual space… . That was the earliest Cubist painting – the quest for space.” Georges Braque

Most of all abstract art creates a composition which may exist with a degree of independence from visual references in the world. It was caused by the need of creation a new kind of art which would encompass the fundamental changes taking place in technology, science and philosophy going through the end of the 19th.

“All painting, no matter what you are painting, is abstract in that it’s got to be organized.” David Hockney

“They always say that time changes things, but you actually have to change them yourself.” Andy Warhol

Firstly, realism in the arts is the effort to represent subject matter truly, without artificiality. Secondly, it has been prevalent in the arts at many periods. It is in large part a matter of technique and training, and the avoidance of stylization. Thirdly, realistic paintings are mostly scenes from the life of ordinary people, painted with a simplified means of expression, of peaceful palette and composition.

“You have to start somewhere. You can always erase reality later on.” Pablo Picasso

The most important practical difference between acrylic paints and oil paints is the drying time. Acrylic paints are ideal for painters using sharp and firm brush movements. Mixing acrylic is more difficult than mixing oils just because acrylics are starting to dry quickly. With oils you can mix colors for many days. Resulting in a variety of color variations on which acrylics will not give you enough time. This slow process of drying oil can be seen as an advantage for some technicians. On the other hand, this lengthens the process of image formation.

Another advantage of acrylic is that it can be rinsed with water during work, no solvent to clean brushes, and when dry, the paint layer is waterproof and can quickly overlap both hides and lacquers. Acrylic paint is durable, elastic, resistant to aging, does not turn yellow, does not crumble.

All these advantages contribute to the growing popularity of this painting medium among contemporary artists.