Guest writings – What was under the eyelids of Andrzej Wajda? 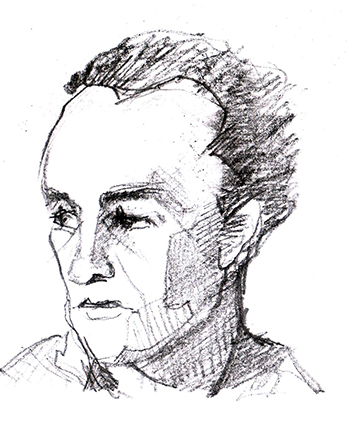 What is afterimage? Professor Władysław Strzeminski explained it this way: you are gazing at what surrounds you, then you close your eyes. What you see under the eyelids, it is afterimages.

Strzeminski was a well known and respected avant-garde painter before the II World War (obviously valued by those who appreciated the avant-garde). After the war, however, the fate of a prominent artist unfolded tragically. He was expelled from Academy of Fine Arts in Lodz, brought to humiliation and misery. He probably died of tuberculosis in 1952.

Andrzej Wajda studied painting at that time in Krakow. He belonged to the group of young artists, founded by Andrzej Wroblewski, perhaps the greatest Polish painter of the postwar era. These years were for Wajda a time of artistic but also ideological choices, so it is not surprising that he returned to this period of time in his work. However it is rather surprising that only in his very last movie.

So what image of the forties and early fifties was under the eyelids of Andrzej Wajda?

Reviewers praise the faithful reproduction of the reality of those times: streets, interiors, costumes. But the reviewers are rather young and old viewers would point out that the image created by the director is too schematic. It is worth stressing that all reviewers criticized the scenario. And it’s hard to disagree with them. For example, let’s take the first sequence of the film. There is a student coming from another city on students plein air painting, led by Professor Strzeminski. She wants to get to know the famous painter. He walks up to her and begins to speak. What does he say? Maybe he greets her, maybe says something about the weather, or anything else relevant in such a situation? No. The hero of the movie delivers solemnly a long tirade about the painter’s workshop, speaking the language of the school book.

The leading actor Boguslaw Linda criticized the scenario using almost insulting words. Disadvantages of the scenario are not only dialogues, but also the lack of distinctive characters and the overall schematic.

And so it happens for the first hour of watching the movie. And then – comes glare.

Suddenly everything becomes clear. The imperfections and simplification, but you must find the appropriate key for this last artwork of Wajda . It is not known whether the director had planned this from the beginning, or maybe from the imperfections of the screenplay by Andrzej Mularczyk, he made a virtue, but the thing is ultimately irrelevant.

There is such a scene. Strzeminski is starving. Friends handled him a job as a decorator in the PSS “Społem” and here we see an outstanding artist busily putting the final touches of the left eyebrow on a giant portrait of Bierut (a Polish communist leader). Such portraits were hung along the route of the 1st May Day marches (organized by communists). At this point the viewer is asking himself: what is it? After all, that was previously mentioned about Strzeminski and that if he had only accepted a proposal to join the group of socialist realism, he would have returned to the Academy of Fine Arts and would have material security. So why does he do this, except that for a pittance?

You can explain it so that the director probably made a mistake and was inconsistent, but after all we are dealing with the work of very experienced craftsman. Telling the truth, this scene seems to be crucial in the entire film. I can  be a ham-bone – seems to speak to us Strzeminski – but as an anonymous decorator. I will not, however, put my name behind anything that would not be in accordance with what I deeply believe in.

“Afterimage” is in fact a story of unwavering persistence with your own convictions. About the faithfulness to yourself. Story, or rather an allegory, and in such convention all of simplifications and exaggerations are explained. And because it’s all about artistic beliefs, amount of Strzeminski’s arguments on the duty of painting, workshop of the creator and his responsibilities is so huge.

But here arises a bit of sad reflection. For how many people Strzeminski’s views are important today? What was a matter of life and death for him, to the viewer from the year 2017 is just unnecessary longueur. Years pass, beliefs pass…

In an indirect way, other important artists of that time, are also present in the “Afterimage”.

The director chose the music by Andrzej Panufnik, who in the late forties and fifties was a well known and respected composer in Poland, but in 1954 chose freedom in the West. And if – someone could ask – he had gritted his teeth and withstood two years, to wait till rehabilitation of avant-garde music? Because in 1956 the first Festival of Contemporary Music “Warsaw Autumn” was launched.

In addition, in the background we can hear a “mass song ” (as it was once called) “Beloved country” with the melody of Tadeusz Sygietyński to the words of Konstanty Ildefons Gałczyński. Gałczyński was also a tragic figure. During the years, which were documented in “Afterimage”, he regularly published in the weekly “Przekrój” the satires switching the environments frowned upon by the authority, and yet the authority – in the person of minister Włodzimierz Sokorski who in “Afterimage” has its own little not much honorable place – often disapproved of Gałczyński, because after all, he was too middle-classed for its taste.

The poet died suddenly in 1953. Was it really, as Czeslaw Milosz said, a suicide? Milosz refers here to the sculptor Alfons Karny, who made a death mask of Gałczyński and had seen hanging furrow on his neck. The poet’s daughter Kira Gałczyńska strongly denies it, and says about heart attack, but without a doubt Gałczyński also was a victim of that system.