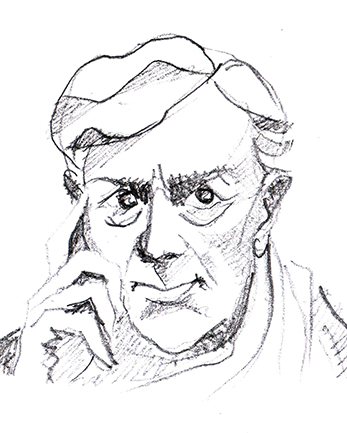 Born in 1882, Georges Braque was a French painter, sculptor and collagist, who was most well known for being the founder of Cubism alongside famous artist Pablo Picasso.
Before he created the theory of Cubism and introduced it to his paintings, his early works had been initially influenced by Impressionism, Pointillism and last but not least – Fauvism.

“What greatly attracted me – and it was the main line of advance of Cubism – was how to give material expression to this new space of which I had an inkling. So I began to paint chiefly still lifes, because in nature there is a tactile, I would almost say a manual space… that was the earliest Cubist painting – the quest for space.” Georges Braque

In 1905 he was impressed by the debut of the Fauves and joined the fauves group ,gathered around Henri Matisse and Andre Derain, starting on a period of a color experimentation that would last the next few years. A series of landscapes including “Yellow seacoast“, “Landscape near Antwerp” or “Boats on the beach“(1906) can all be considered as a few truly fauve paintings. Bold, vivid colors, detached from reality, were characteristic of the fauvism style. They were also very close to Matisse’s masterpiece in the color choice and the lineal rhythm.

In 1907 (one year after Cezanne’s death) a memorial retrospective exhibition of Cezanne’s work attracted the attention of many avant-garde artists of the time. Even if Cezanne could have had some influence on the work of the young generation of painters, it was a very limited influence due to his long-term isolation in the French province. This time, a wide audience (including artists) could see a significant number of images of the artist who wrote in 1904 “(…) deal with nature by means of the cylinder, the sphere and the cone, all placed in perspective, so that each side of an object or a plane is directed towards a central point.”
The two young artists – George Braque and Pablo Picasso visited the exhibition and both of them simultaneously made a good use of it they took a fundamental step forward in the development of the Cubist language.
In his landscapes from that period of time, Braque started to neglect classical perspective and leave the number of details out. The objects didn’t imitate nature-they were reduced to simple geometrical forms. The limited color palette of greens, browns and grays and non uniform application of paint between various color fields also referred to Cezanne. Houses at l’Estaque (1908) is a key example of his work at this stage.
When Braque met Picasso- who had his apartment just two blocks apart from Braque’s studio-he was confronted with the Demoiselles D’ Avignon, which inspired him to create Large Nude (1908).

Georges Braque’s paintings of women in the Cubist style

Georges Braque’s Large Nude, as well as Picasso’s Demoiselles D’ Avignon, was quite a departure from the usual depiction of women. Braque’s female nude was formed from geometric shapes and used a limited palette of colors to create the illusion of mass and weight. It was displaying a growing fascination with geometric patterns and solid, defined forms.
In Head of a Woman (1909) he kept eliminating the space and unfolding the object, using a limited palette of colors- mainly browns and grays, but yet it’s not as dark and monochromatic as his subsequent works.
Woman with a Mandolin (1910), Woman reading (1911), Girl with a cross (1911) and Woman with a Guitar painted in 1913, using oil and charcoal The object is depicted on the canvas surface from all sides at the same time, which approaches abstraction. Like in Braque’s still -lifes the woman’s figure breaks down into its different components, which are joined together again in a new arrangement. Background and figure fuse into a web of vertical and horizontal lines. Some fragments are recognizable – like an eye, lips, hair, a necklace with a cross or a guitar, while others are so integrated into the abstract space of the background that they are barely discernible. Despite the reduced palette of colors (a narrow range of ochres, grays and browns) Braque achieves luminous effects by using a technique of small brushstrokes and loose facture.

Although the fragmentation of the object makes the appearance mostly abstract, this depiction never crosses the border of abstraction. Cubism, simply led realism to the border beyond which abstraction begins. The objects became dispersed and disassembled to a great extent to become precisely presented, material object.
These depictions are the quintessence of Cubism which lasted from 1909 to 1912-the most important style in modern painting of the twentieth century.

“With age, art and life become one.” Georges Braque